What I Learned While Teaching

A few months back I wrote an article about how developers should share their knowledge with others. Once it was published I received tons of very positive feedbacks from both developers and non tech people, some of them even asking what they should do to learn more about how the web works.

At the same time I happened to be talking with a friend of mine who started giving classes to young entrepreneurs via leeaarn and it seemed pretty cool. One thing lead to another and I decided it would be a good experiment to take this blog post even further and actually try to create a series of classes to teach something to non developers.

After discuting with one of leeaarn’s co-founders we decided on a format of 3 classes of 2 hours each dedicated to people with little to no experience in creating websites.

I spent quite a while laying out the content of these classes.

Of course I already knew the subjects quite well but making complex ideas simple can get pretty hard! Also I had to find a good middle point in technical accuracy and not boring everyone to death with details or wasting too much time.

While I already helped out friends or teammates learning new concepts, this was the first time where I’d give a more formal class to complete strangers. In the process I learned a lot.

I was really surprised when around 10 people showed up, and even more surprised by how involved they were. A lot of relevant questions were asked and there often was a discussion going on. It was great to see a non tech crowd so genuinely interested in concepts as obscure to them as DNS or source control. This made my day every time.

Some obvious things are not (& vice versa)

While writing my slides for the first class I overlooked some concepts that seemed obvious to me and focused on others that felt more complex.

In some cases I was way off, like when I thought that the word “protocol” was known by everyone. Spoiler: it’s not. On the other hand people understood very quickly what HTML, CSS and Javascript were and how they intereacted with one another when I thought it would take half the class to get this point accross.

People don’t know much about security

I feel there is a great need of education regarding this topic. For instance it didn’t shock a lot of people that some websites would store their password without encryption and send them back by email when pressing “I forgot my password”.

I hope I freaked them out enough about the risks they’ll spend the extra time needed to properly secure their company’s website :evilsmileyface:

I did some live coding and it seemed like it helped them a lot to understand what programming is all about. Overall I’d say that 2 minutes spent in the Chrome inspector are worth 10 slides of tedious HTML syntax description or any other kind of theory.

I also spent time in the console, using whois, dig, ping, curl and so on to showcase a bit of the web’s behind the scene. While I think that the console felt a bit weird to people present (the “wtf is that black screen with lines of text scrolling?” effect), it helped demonstrate that there is a lot going on when you try to access a website.

It was also very fun to crash one of the student’s website with a simple DoS attack to explain what this was all about and introduce a part of the class about performances!

At first I was really worried I wouldn’t have enough material to keep people interested for two hours… but by the last session it seemed like we should have spent a full day talking and there would still be discussions to be had! The subjects I presented are very broad and each have immense ramifications, so staying focused and not taking too much time was actually the hard part.

To sum it up, I now think that it isn’t an overstatement when I say “I could talk about the web for days”.

Public speaking is a skill that requires practice

While working on my engineering degree we had quite a lot of projects and keynotes. This taught us to talk in public, and at the end I felt that I got decent at it… but damn does it go away! This is clearly something you need to work on every once in a while to be efficient right away.

In my case it came back very quickly, but the first minutes of the class were painful and a better preparation would have fixed that.

Ok, this isn’t news to anyone who tried to explain how to use a computer to an old relative, but it’s always worth mentionning that it really is a challenge. While preparing for the class I realized that I wasn’t really able to explain some concepts off the top of my head. Just like public speaking it’s a skill that needs practice.

No wonder the Explain Like I’m 5 subreddit is so popular, it truly is an intellectual and stylistic exercice!

This was a great experience. I got to teach things I am pasionated about and so far I got some very positive feedbacks. I think that I’ll do it again sometimes!

In the meantime, here’s a picture of me looking all teachery: 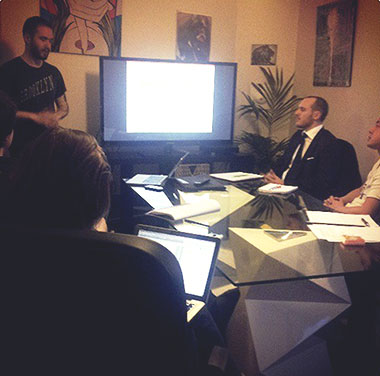