The Problem With Peak

A couple of days ago I ran into a new application by MetaLab called Peak. The application is supposed to be “the automated way to keep track of what everyone is working on”. Basically you plug in a bunch of services such as Gmail, Github or Basecamp and the app gives your an overview of what’s going on as well as metrics about your team. Since I’m a big fan of what MetaLab produces, I decided to check it out.

I was very disappointed.

Don’t get me wrong, the app looks amazing. The UI is slick and everything is very well organized. My problem with it is that the product seems misguided.

I might be mistaken and I’m totally open to change my mind if proven wrong, but I’ll try to demonstrate in this article why I feel this way.

I love The Daily WTF and its cautionary tales about software development. Some are just funny, but others tell a lot about what can actually happens in some misguided companies. For instance what happens when you start measuring productivity by the number of commits or by the number of lines of code.

Some metrics are interesting, such as progress on the deadlines, what’s the team velocity, how much time is spent on a given task and so on. Peak kind of track this thanks to the Github and Harvest integration. They tell me something and I can act based on them. For instance I could assign more people to a hard task, organize the roadmap or plan for team growth.

Others are not interesting, and downright noise. For instance I don’t see how the number of emails sent is relevant.

Let’s say Alice sent 100 emails this week and Bob sent 10. What does it tell me? Is Alice really productive and Bob slacking off? Is Alice wasting time sending emails and Bob is very efficient? I just know, with absolutely no context, that emails were exchanged. It might even be internal emails with jokes in them.

Same thing with file editions. If Bob edited 20 files, what does that tell me? Is he working a lot? Is he reorganizing his dropbox? Again, this tells me nothing of value.

I might be able to get something out of these if I spend time talking with Alice and Bob, but then it defeats the purpose of the app. So I ask, why even bother looking at metrics if I can’t do anything based on the information they provide? 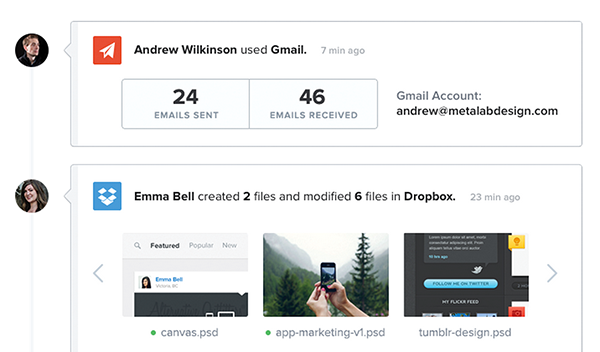 I’m going to make some assumptions about the way Peak works. I don’t have an access to the app, so I’m just going to make educated guesses based on the commercial websites. If I’m wrong, please let me know.

It seems like that, based on the employees’ activity, the app will output metrics for the managers or team leads to read. 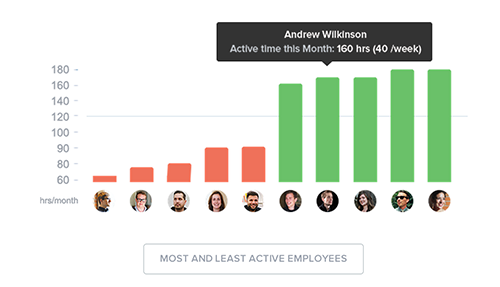 On one side we have “red employees”. Color coding seems to indicate that these are not performing well as red is always related to something negative. On the other side we have “green employees”, these must be working well because green is usually a good thing.

Since the metrics used are not relevant, this ranking is biased and unusable. It just creates random ranks based on nothing else but activity.

The value of an employee is not her activity but what she produces. If Jane sent 0 emails about a new feature, but delivered on time and customers were happy, then Jane did a good job even if there is no perceivable activity within the Peak app.

On the other end, if William doesn’t produce anything but sends of lot of emails while messing around with files on the dropbox, he will be deemed “productive”. Jane will be “red” and William will be “green” in the eyes of management. This can’t lead to good things when you reward people based on the wrong kind of metric.

One could say that the intent isn’t to say that “red” employees are bad, but seriously, who would like to be flagged as the “least active employee” of the company ? 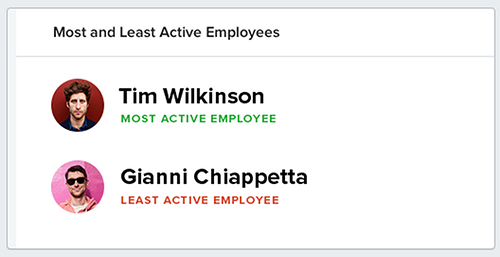 I personally think that measuring hours doesn’t help producing value. You just know that your employees were here, but they could be reading Facebook all day. Still this is the oldest and easiest form of management so it’s not surprising that it’s the way it is in most places.

What [banning remote working] reveals more than anything is that Yahoo management doesn’t have a clue as to who’s actually productive and who’s not. In their blindness they’re reaching for the lowest form of control a manager can assert: Ensuring butts in seats for eight hours between 9-5+. Though while they can make people come to the office under the threat of termination, they most certainly cannot make those same people motivated to do great work.

Again, this rewards employees that are not necessarily the best ones. Someone completing her tasks working a 40 hours week is probably more valuable than another person working 100 hours a week to produce the same output. One could also add that long hours are not sustainable and that the employee working crazy hours is more prone to burn out, which is not good for anyone - employer included.

Working overtime sucks the spirit and motivation out of your team. When your team becomes tired and demoralized they will get less work done, not more, no matter how many hours are worked.

Note that this applies mostly for qualified workers, but Peak seems to be targeted to startups where there are a lot of engineers, product managers or designers.

In business management, micromanagement is a management style whereby a manager closely observes or controls the work of subordinates or employees. Micromanagement generally has a negative connotation.

micromanage: to manage especially with excessive control or attention to details

To me knowing what tasks someone is working on and assuring that it is delivered on time is management. Checking how many emails are sent is micromanagement, checking a detail that is irrelevant unless your job description is to write and send as many emails as possible.

Some features in Peak encourage micromanagement even if the automated tweet when sharing from their website says otherwise.

To me it feels that the solution here would be to stop micromanaging altogether and not provide an app to make it easier! If, as a manager, I have the need to interrupt my team every hours to know what they are doing, I must be doing something wrong.

There are no perfect solution for this and it’s a really hard subject. I’m not trying to solve this issue here, there are a lot of smart people theorizing about it out there. I just want to point out that making it automated doesn’t make it something else than some kind of less intrusive micromanagement.

It seems that Peak has a lot of potential, but the team working on it should take all this into consideration. I’m sure that they mean well and, in an ideal world, people will take the metrics as they are - possibly flawed outputs of a complex process aimed at creating value for the company. No one will consider the “red employee” factor. No one will game the system.

Except we’re not in a perfect world.

Managers will abuse it, employees will game it.

Of course this will not happen everywhere! There are some great companies that know how to deal with these subjects, but it’s very likely that some will use this for “evil”.

I’m sure they have thought about it, and I’m not a product guy. But I don’t like criticizing without giving ideas on how to improve the situation.

I really hope that people will use this product for good (helping companies create value and protect employees from interruptions) and not evil (micromanagement).