I wouldn’t say that I’m into quantified self, but I do enjoy having some idea of what I’m doing with my life. Wearing gear tracking you, a Jawbone for instance, feels overkill to me. My approach is simply based on Foursquare to see where I’ve been and a calendar app to note what I’ve done.

A while back I thought it would be cool to have stats summing up how I felt about my life. It’s a thing to know facts about my activities, but it’s another to see if I actually enjoyed myself ! So I searched the web for good mobile applications but didn’t find anything matching what I wanted.

Disclaimer: From this point on, please understand that I’m not here to bash anyone. The apps I tried were not for me, but I’m sure they work for some. I might also have missed some good apps, but I did spend a while looking. Either they had bad SEO or they weren’t released when I searched.

First, let’s look at some of the apps I tried. I’ll spare you the countless joke “mood scanners”. 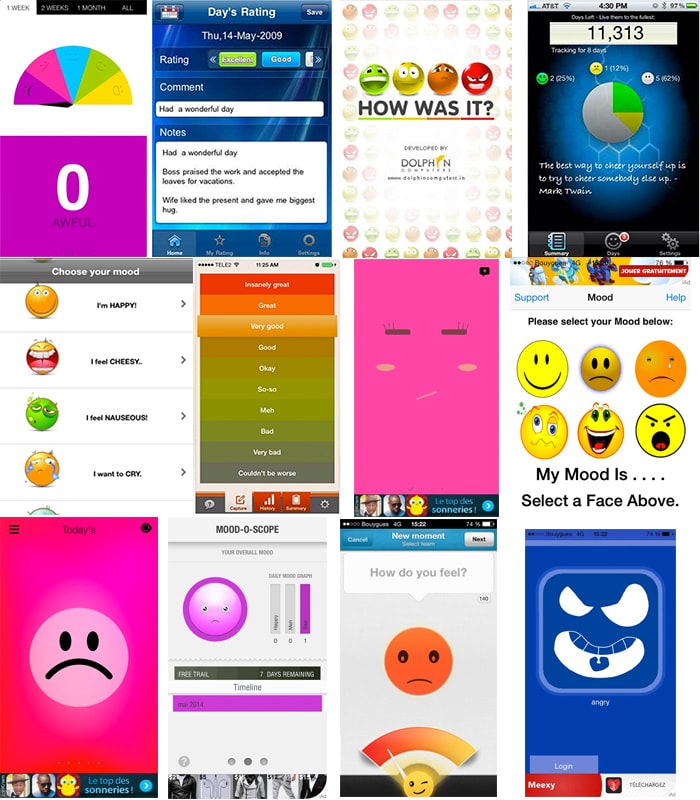 Too Simplistic or Too Complicated

It just felt too simplistic. A day can be way more than one thing ! Saying that my day was terrible just because a part of it was bad wouldn’t be right. Mitigating the result by stating that it was “average” would only hide the interesting data and I’d constantly end up with average notes…

Some apps would get into more details… but then it would be too much and the process becomes tedious ! To be fair, most clearly had a more medical approach and were destined to track every single details of one’s day. Other apps would go in depth in one direction, such as calories intake or miles ran. These apps were ok, but not what I was looking for.

When a day is good, I’m already enjoying myself so I don’t need anymore reinforcement… and let’s just say that if my day was bad, I don’t want to tell it to an app that rewards me with an “aww poor you” alert box alongside a crying smiley face gif.

I also really don’t like the green/red color coding for the same reason.

Everything Doesn’t Have To Be Social

I was really surprised by the number of apps that have some kind of social sharing built in. My take on these kind of apps is that they should be treated like the new iteration of diaries, just a bit more data oriented… and you wouldn’t go show your diary around, would you ?

I think this leads to dishonest daily ratings just for sharing purposes, defeating the whole point of rating your day.

I do enjoy the “scratch your own itch” mentality that I apply to the extent of my available time in open source, so I teamed up with a designer friend and we created Liff.

Here’s how this new app addresses the points above.

Everything Falls In 6 Categories

Basing ourselves very losely on Brian G. Dyson’s juggling metaphore, we decided to classify everything happening in one’s life into 6 categories: Love, Friendship, Health, Family, Spirit and Work. For instance a fun birthday party might have positive effects on Friendship, Love and Family… but could have a negative impact on Health if you stay out too late !

Based on that, you don’t rate your day with a single grade or smiley face. Instead you get to use 6 sliders, one for each category. This allows you to be more granular. A bad day at work doesn’t mean a bad day in general.

It’s both simple enough that rating a day doesn’t take much time and complex enough so that the result is interesting. This results in better data and a way for the user to relativize a day’s events. 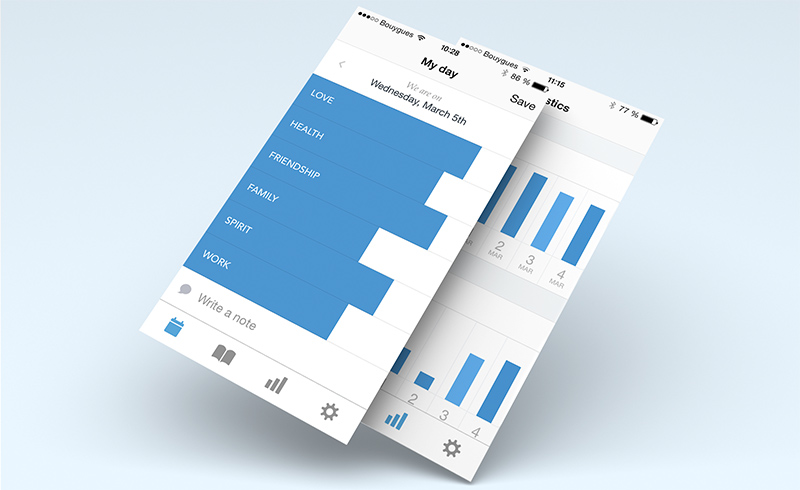 Track Your Day With No Judgment

You might have noticed that there is no explicit value on the app sliders. This is because the rating system is left to the user to decide ! Maybe a good day is 75% filled, maybe it’s 100% … the only sure thing is that Liff will never give you any hints on what it “thinks” of your input.

Overall, the app design and copy try to be neutral without being completely impersonal. 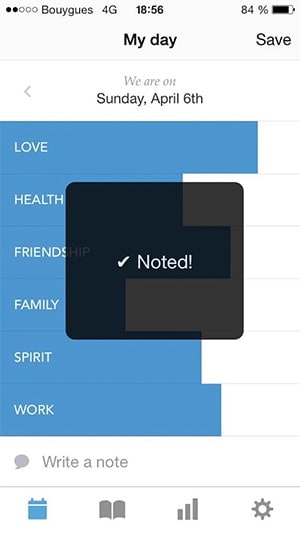 To help you have a coherent grading system, note that the current day’s sliders are prefiled with yesterday’s values.

Of course, like any quantified self app, you get graphs, daily push reminders, data exports via email, notes, backups on the cloud and so on. I might get more into this part of Liff in another article. 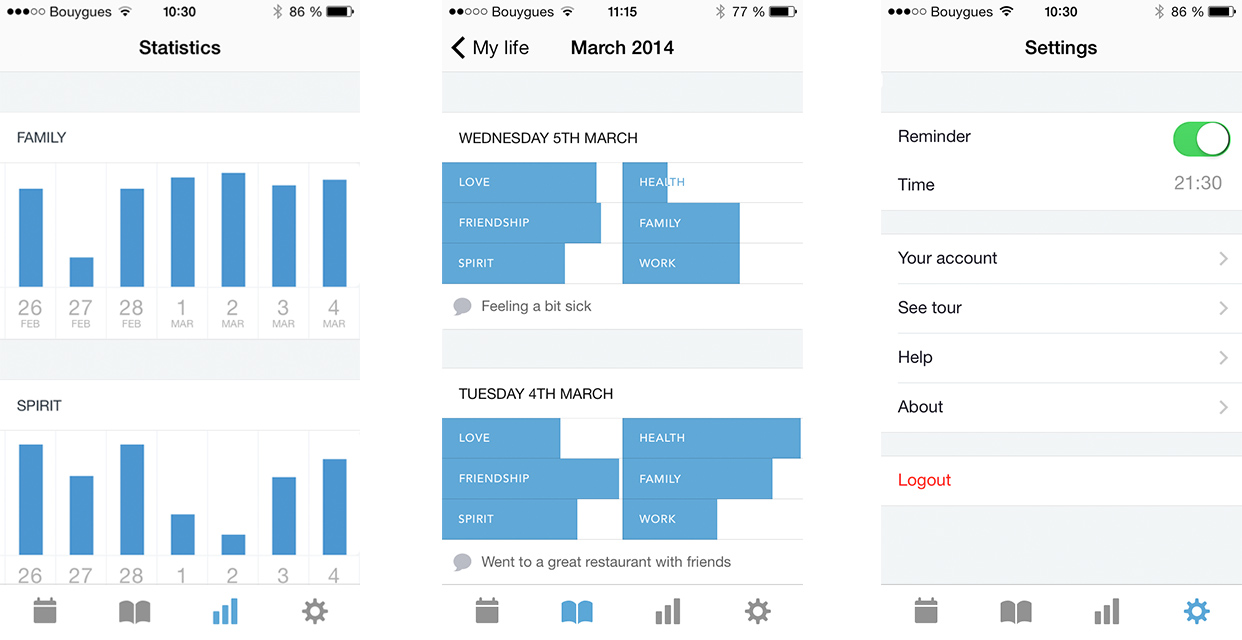 Oh, and absolutely no social media integration… and let’s just say that it’s not because I don’t know how - I worked with the Facebook API for years after all !

Give It A Try, It’s Free

I’ve been using Liff ever since it was somewhat functional, so for about 8 months now. So far I’m very happy with it and I did notice some patterns with the way I feel about my days.

We released it recently on iOS for free. Depending on reception we’ll release on Android too (it uses SteroidsJs so it should be possible quickly). If you share my opinion, please give the app a try and send me your feedback… and if you don’t agree, remember that I don’t claim to have the truth, but feel free to leave a comment. I’d love to know what you think !