How To Find Points Contained in a Polygon Using MySQL

MySQL was a bit late to the geospatial party compared to other databases like Postgres, but with the 5.6 and then the 5.7 releases a lot of new GIS features were finally implemented. For instance in 5.7 we got, among other:

There’s a lot of interesting things we can now accomplish using these new fonctionnalities. Today I’ll showcase a very simple example on how to do a search using a Polygonand a Point. The goal here will be to answer the question “is this point in this city?”.

First let’s create a “places” table with a name and a set of coordinates. However, instead of storing a latitude and a longitude as two different floats I’ll use a Point.

Then let’s add a couple of places in Paris and one in New York for very basic testing. The way to store a new Point is very straighforward:

Let’s then try to answer the question “what places in my database are in Paris?”.

The distance returned is in metters, so everything checks out. If we want to see all points that are less than 10km from the Louvre, we can do:

This is a pretty good approximation to being in Paris, but that’s not perfect. What if I wanted to know if a point was really in Paris and not just close to the center of Paris?

Filtering With a Polygon and ST_CONTAINS

First let’s define a very basic shape enclosing Paris. The coordinates I’ll be using here are a very rough approximation and I only define a rectangle, but that’ll work for this example:

If you look closer, you’ll notice that the last point is the same as the first one and we have 5 points. This is because we need to “close” the polygon.

To double check the result, we can use Sequel Pro’s preview feature and confirm how it looks: 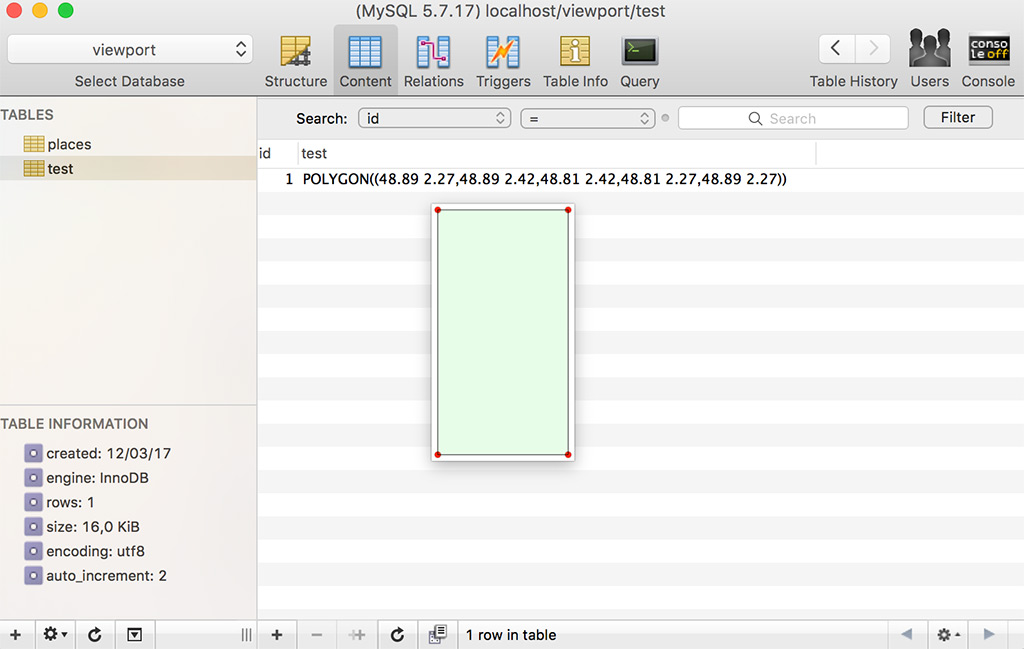 Then we can use ST_CONTAINS to ask all the places contained in the @paris polygon:

Of course I could have skipped the step where I defined @paris and called POLYGON directly in the query.

Geospacial functions are fun to play with and since we can now use spatial indexes in InnoDB, they become actually usable in production. I won’t get into performances in this article, but I recommend reading the Percona article “New GIS Features in MySQL 5.7”.