Start Working on Your Side Project Tonight

To me a side project is taking an idea and building it from scratch. You do not have to complete it, it doesn’t need a business model or turn into a company over time, it doesn’t even need to make sense to other people than you. It is just a way to experiment. If later on it turns out into a successful company, good for you, but it doesn’t have to be your goal.

If you’re like me, you think that development is a creative process, and should be treated as such. So what better way to be more creative than by removing all the usual constraints of a day job – deadlines, legacy code, clients, etc. – and just building something for fun and the sake of building something cool!

Doing a side project is a great way to experiment with new technologies, try new processes and be able to fail with absolutely no consequences other than maybe a few hours wasted… and even then this time isn’t really lost because you tried and you learned something. It might not be much, but it could turn out to be a key point at your next job interview, or it could give you a better insight at what you do in your day job.

By know you might notice that this article is more directed towards people with some experience in development, but the concepts and ideas are the same for everyone. Everybody can benefit from having a side project. If you don’t have a technical background you could go to a Startup Weekend with an idea or team up with a developer. You could also learn how to code, it won’t be time wasted!

Great startups can come out of side projects

You’ve probably heard about Gmail starting of as a 20% time project (as in the amount of time a developer there can spend on other projects than the ones they’re assigned). This isn’t the only example.

Craigslist was Craig Newmark side project started in 1995 and only turned into a real company in 1999. Basecamp, a very successful project management software was initially an internal tool of 37signals that answered their own problems as a design firm. Instapaper was started by Marco Arment while he was CTO at Tumblr. You can even say that Twitter was a side project of a group of people working at Odeo.

In France there are also examples such as HashtagBattle that was a startup weekend project and ended up getting a lot of exposure. Tigerlily was created during a hackaton, Super Marmitte was a side project until it got exposure at LeWeb in 2010…

You can read more about the beginning of some of these projects in Founders at Work by Jessica Livingston.

You don’t have to be that ambitious

Take my latest side project for example. A friend and I somehow got ourselves thinking it’d be fun if we could match people’s initials with airport codes. This coincided with the release of a new version of my favorite framework that I wanted to try out. We decided to use it to create a project and learn about this new technology in the process. It took us a few evenings of work and we learned a lot while having fun.

It doesn’t scale, there’s no way to make money out of it… but really there is no need to try to create the next Facebook! Simply do something that you like and that will teach you something, and then maybe you’ll create a new hit startup. First, take it only for what you’ll learn and the experience you’ll gain from it.

“Ok I get it, side projects are great, but I just don’t have the time!” 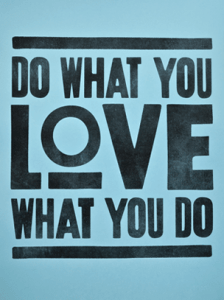 … is what I hear people say all the time.

This is not a valid argument; if you really wanted to, you could easily save a couple of evenings to work on your project. A lot of people feel like they won’t be able to get anything done, but unless you have complete A.D.D. you will get something done if you stay in front of a computer a few hours a week.

It’s just a matter of focusing and being passionate. Find and idea and a technology that feel right. If you like what you do, developing could be as fun as whatever you do on your free time.

My point is: Just get started.

I’ll add that it’s better if you begin small and scale up later. Nothing is more depressing than getting yourself into a project that will last years with absolutely nothing to show for it. It’s not as fun. Work in small steps, get feedback as you progress, and most of all try anything that goes through your mind because failure is an option, but learning nothing out of the experience isn’t.

Alright, you know that one idea that you had? The one you told your coworkers about? Yeah the one on a piece of paper or written in your iPhone.

Start working on it this evening.

Keep it fun, keep it interesting, do not pressure yourself. Nothing bad can come out of it!

This article was originally published on The Rude Baguette. Do what you love poster by Ugmonk.