*Update 9 April 2014: Since this post, I released a quantified self app using SteroidsJs and wrote another article with tips & tricks to know when building a Steroids.js app (or any hybrid app really). 300ms delay, overscroll, text rendering, 1px borders, local storage, performances, i18n … it’s all there!*

As I wrote before, I like the idea of developing mobile applications. I don’t plan to focus exclusively on it, but having an iPhone app as a pet project seems pretty cool and creating something for Android could be interesting as well in the future.

The problem is that, like a lot of people, I don’t enjoy the experience of working with Objective C and XCode. I thought I found a solution with RubyMotion, I even wrote about it… but I was mistaken. While RubyMotion is a great project, it’s not for me.

Yes you get to write Ruby code, but that’s pretty much it. You still have to learn about the SDK to even start to create something simple. This can be perfectly fine for some with more experience or wanting to get experience with the iOS SDK, but I just want to build something. Overall it felt like using Ruby just complexified development for me. I couldn’t use code snippets or the main iPhone resources available, and RubyMotion lacked documentation and tutorials. I got something done, but it wasn’t good enough and I never released anything.

I tried again a couple of months later with an idea more simple: create a web view wrapper using RubyMotion and do everything inside a single page HTML 5 app. Sadly the lack of native UI made everything feel a bit off, so I scrapped that as well. I thought about using PhoneGap but I figured that the app would end up with the same problem.

Fast forward 6 months and I read that AppGyver released Steroids.js, an solution promising to “Bridge The Performance Gap Between PhoneGap And Native Apps By Using Native UI Components And Animations”. I immediatly thought that it was what I wanted! The next day AppGyver announced that Steroids would be free for everyone, so I decided to give it a try and write about it here.

Before reading more, please take this article as it is: feedback on this new solution to create mobile apps. I’m not trying to educate anyone on how to do things or evangelize. I only played with it for a few days and haven’t put anything in production using Steroids. I also know I’m making a lot of mistakes because, while I’m a decent web developer, I’m not really a great mobile developer.

AppGiver provides a pretty good documentation. It’s far from complete, but what is there is well written and very clear. To set my development environment I followed their tutorial.

Overall everything went smoothly aside from a couple of gotchas very easy to figure out.

For instance Steroids uses an older version of node.js so I had to set up nvm in order to get it to run. The thing is that nvm creates a .bash_profile, but since I use zsh it wouldn’t pick up the correct path automatically as promised. Moving the concerned code to .zshrc fixed that.

nvm requires that you specify the version you need in order for you to access the steroids command. It’s similar to what rvm does, but you still have to think about it.

After completing the installation, I executed the script to scaffold a new application, downloaded the scanner app, started the application, scanned the QR code and … Wow! It’s really neat! The application ran on my iPhone just a few minutes after starting working.

By the way, if you run the Steroids connect script with the watch option it will reload the app automatically on every device connected for maximum effect.

Right away you don’t really get a full structured project. To do so you have to run some generators. The default approach is to give you free choice over what you want to do about file organisation. Personnally I would have prefered it was the other way around, giving me the structure but allowing me to remove it… or maybe an option in the scaffolding script.

Steroids comes with a very cool “native” Drawer, meaning that it will display a webview on the side of your app with a native animation. The tutorial explaining that got me excited so I decided that my app would have a drawer!

Getting it to work was almost as simple as going:

And then create a webview with a link to open it.

Doing this will work, but you’d prefer to have a gesture to open and close the drawer. This is handled by Steroids as well, but this breaks gestures inside your webview. It’s also a bit more complicated to have the drawer on some screens and not others.

After a few hours playing with it and talking with a real iOS developer (“you have a drawer for your app with 4 screens???”) I decided that it wasn’t really the UI I needed for this project.

The next day I dropped everything and went for a more classical approach with tabs at the bottom and a nav bar up top. It turned out it was way simpler and actually pretty straightforward to do with Steroids.

Adding the following in a controller gives you a nav bar:

This added in the config gives you a tab menu:

You then get access to ways to customize colors for everything as explained here, and… tadaaaa: 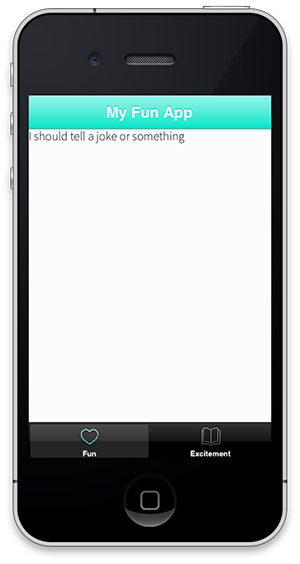 The text displayed is contained in the have_it.html file placed in the project.

It is really simple and, even if this was written with javascript, it looks native. The result feels really right and it didn’t take long to create.

There are some limits to this. For instance, while you can add buttons in the nav bar, you can’t add icons yet. I’m sure they will improve on it, but for customization you don’t have as much options as going full native.

The application I’m building requires that you login. At first I wanted to have two different webviews and shift between disconnected and connected mode, but it got complicated because of the tab menu… so in the end I just put a modal window that pops up when the user is not logged in. It’s not perfect but it gets the job done for now.

Hiding it is pretty simple as well:

A cool feature provided by Steroids is the layer stack.

This gives you a navigation between independent webviews within your application. You just display a single HTML page and can organize all your files into a tree structure in a pretty straightforward fashion. Steroids also handles adding and removing views so that it feels native.

They explain it better than me in their tutorials, Enhancing Your App with Native UI and Layer stack.

I needed to have some kind of session. I knew about local storage but wasn’t sure how to go about it, so I quickly hacked something based on cookies.

It works well, but I don’t think this is the best way to go.

My application will work with an API that I am also developing. Overall it’s just like developing a website: you get jQuery or whatever library you want and make calls and display the result on the page.

It might seem obvious, but it is still good to mention that the API will need to accept cross-origin resource sharing for the calls to work.

I use Rails, and the quick way to do that was to use the rack-cors gem and set it up as such:

You can download an application on the appstore, scan a QR code with it, and it will take you straight to your application. This is great to show previews to people and iterate quickly and saves time compared to solution like TestFlight that requires you to upload a build.

Of course it has limitation as your app runs inside the scanner application, but in some cases it can be enought if it’s just about displaying the latest modifications, checking the design or proofreading the wording.

AppGyver provides a solution to build in the cloud. You need to spend some time setting it up, but once it’s done a new build can be scheduled in the click of a button.

This works fine, but still needs some polishing, mainly on ways to get an ETA for the build. Right now I’ve seen build times varying between 12 hours and a couple of minutes. Apparently it should be better moving forward, so I’ll wait and see.

The documentation provided by Appgyver is very clean, but could use some more tutorials and examples. This was to be expected since the project has only been released very recently.

It’s worth mentioning that the team is very responsive on twitter or the forums. For instance I was confused about customizing colors, so I asked on the site. The next day they would have put up a new tutorial with concrete examples. Pretty sweet.

The community is small right now, and looking online for documentation or blog posts will yield absolutely no results. Hopefully this will improve.

I think that this is a very interesting project so I will keep on working with Steroids to get as far as I can creating my app. You can see that the team put a lot of work into it and the product feels right.

The next steps on my part is to stop playing around and actually start developing something more concrete. I’m also waiting for some features that are supposed to be in the roadmap, such as icons in nav bar or iOS 7 native UI.

*2014 Update: Since this, I’ve released an application using Steroids.js, it’s a quantified self application to track your day. You can check it out on the appstore!*

If you have any remarks, I’ll be happy to hear them in the comments. For questions, I’m not sure to be able to answer all of them - but I’ll try!