When building my iOS boxing app with SwiftUI, I quickly decided to launch in 2 languages, english & French, and after a few months I then added Spanish. Because of that I wasted a bunch of time managing translations and being infuriated at home XCode deals with them.

In larger projects I used tools like Phrase or Lokalize, but they can get costly pretty quick and I didn’t need mosft of their features. In order to save money I first started handling the Localizable.strings files manually, but this was a massive pain. XCode really doesn’t help you avoid mistakes as it doesn’t let you know if you are missing a translation in a given language. Refactoring or deleting translation keys was also time consuming and error prone.

After looking at a few different options that were often too complicated for what I needed, I decided to build the simplest solution fitting my need:

If you want to use this script, it is very straightforward and doesn’t require any interaction with Google’s APIs - so no need for API keys or to even go into Google dashboards. Just create a sheet, change a couple of configuration keys and you’re set. The only drawback is that you have to make your translation file possibly visible to anyone… which I decided was acceptable for my use case, but it might not be right for you.

Keep in mind that I’m really not the first one to setup something similar to this, but I struggled using what was already out there. It either didn’t fit my current workflow, required a lot of setup, used a stack that I wasn’t familiar with or was just plain broken & buggy.

Set it up for your project

Create and configure the spreadsheet

Create a new Google Spreadsheet following the format shown in the image.

Then make the file visible to anyone: 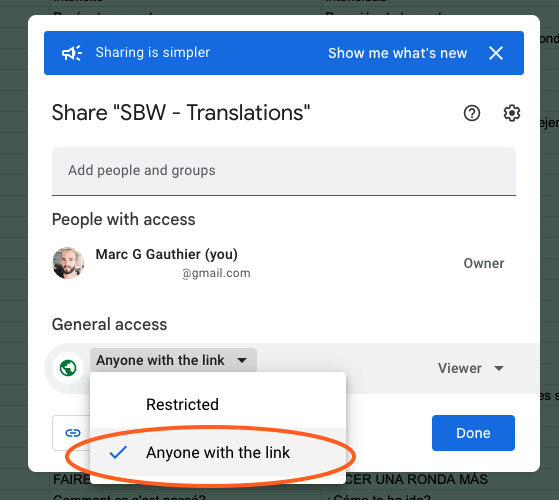 The script is using Ruby (just like Fastlane), which is coming default with a lot of systems. I am using a few dependencies but they should already be on your machine if you have Ruby installed. If you don’t you can follow the documentation here.

Download or copy and paste the following code (gist here):

Update the two constants at the top:

Then you can just run the script by going ruby name_of_the_file.rb and you should be good!